Merries Pants Were the Right Choice for Us. 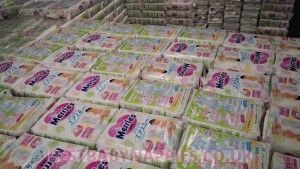 We used diapers for about a year with our daughter but just recently we were compelled to switch to pants thanks to some pretty serious resistance to being put on her back. Each time we had to change her we dealt with fits of screaming, crying, and kicking because she just didn’t like it. Fair enough. Why fight it when the pants are out there just waiting to be purchased. Now that we’ve made the change she can stand for changes after she pees, though for most poops she still ends up on her back, so nothing is perfect. After experimenting with multiple brands we ended up going with Merries pants for a few important reasons.

Merries pants are exceptionally absorbent. We’ve never actually experienced a leak in them, even when she sleeps through the night and fills them with pee. They’re really well made in that regard and thanks to smart design decisions they manage to feel dry even when she’s filled the pants. When she gets up in the morning changing is as easy as pulling them down, wiping her clean, and pulling on a new pair of Merries. We’ve never had an issue with poop spilling out either, which can happen sometimes when it’s an especially high volume bowel movement that’s a little looser than ideal.

The Merries pants fit better than the others we tried. The front goes up high, the back actually covers the entire butt, and the sides are snug without being uncomfortable. Some of the brands we experimented with provided too little coverage, which led to leaks and other issues. The wetness indicator is a nice little touch. It’s not really necessary, but I like just having to look at the strip to see if she needs to be changed. I don’t know if you’re ready to upgrade to Merries pants yet, but I can tell you that it’s been a significant life improvement change for us. They’re so much easier to put on and take off and she’s no longer annoyed by having to lie on her back while we clean her up.

One thought on “Merries Pants Were the Right Choice for Us.”