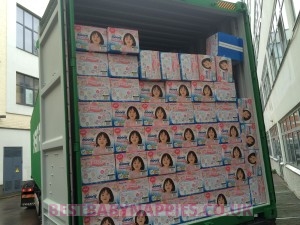 The first criterion is diapers’ appearance. I think that their design is almost similar as well as some general peculiarities. For instance, both Merries and Moony diapers have good tapes for better fixation, they are thin and light even if the diaper are full. Speaking about sizes, Moony diapers are the most comfortable. This brand’s size system perfectly fits our baby. Merries diapers are really good for small babies.

In order to test the diapers for absorbency, I have taken a glass of water. I poured the water to the same place on the diaper. Merries diapers and Moony diapers soak the water evenly, and no lumps were appeared. After 3 minutes I have checked whether the diaper is wet or dry. Moony diapers had the driest surface, Merries were a bit more wet. I think that both Merries and Moony have a great absorbency, because I can hardly imagine the situation that baby pees a whole glass of liquid. So, the skin is always dry under the diaper, doesn’t matter which brand you will choose – Merries or Moony. Thus, I can conclude that the diapers should be chosen according to the size and your baby’s comfort!

We have been trying so many brands of the diapers to the moment when our daughter was 2 years. We got acquainted with such brands as Pampers, Libero, Goon, Merries and Moony. I didn’t buy Moony for a long time because they are the most expensive from all Japanese diapers. By the way, I was totally satisfied with Merries, but once I couldn’t buy Merries because they were unavailable for shipping and I decided to buy Moony diapers.

The first characteristic trait that I have mentioned was rather small pack in comparison with Merries diapers, despite there was a typical number of diapers – L size, 44 items.

While we were using Moony diapers I was amazed because of the quality. I want to list all of them:

– A great anatomic shape. The diapers are very similar to common pants. They are so thin so wearing them the baby doesn’t feel the diapers, they are like underwear.

-The diapers are made from soft material so there is no any irritations and prints on tender skin.

-Convenient shirring in the waist and legs area is tight enough to prevent from leakage but they don’t pinch and graze the skin, thus allowing your baby feel comfortable.

-The inner layer is soft because it’s made from natural material.

-The diapers have fullness indicator.

-The moisture is evenly distributed, preventing from lumps.

-The diapers are equipped with soft and wide elastic band.

-The diapers have great absorbency, they are always dry. I am not afraid to wear one diaper for the whole night.

-The material is breathing.

-An awesome design! My baby and I like it so much!